News From The Trenches - November 2022

Hot Off The Press! 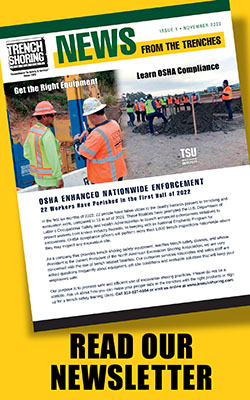 We are pleased to announce Issue 1 of the Trench Shoring Company Newsletter: "News From The Trenches". This quarterly publication is created for our customers, employees and partners.

Every issue will have:

The format is letter sized in PDF format. We'll also print a few copies, which will be available at each of our locations.

The newsletter is edited by Chris Kennedy, Branch Manager, Compton.

"It's great working on the newsletter", said Chris. "We have so much information to share about trenching, excavations, safety, our industry, and the people who make it all happen. I'm looking forward to getting stories for future publication."

Please email Chris with any content ideas, stories or feedback.

Ten years ago, on October 14, 2012, the space shuttle Endeavour arrived at the California Science Center to begin its new mission as a museum exhibit. We are proud of our participation in the historic project to move the shuttle from LAX to Exposition Park.

Trench Shoring provided and delivered all of the plates and Dunkel Bros. concentrated on the placement. We provided more than 1,000 trench plates, which is the equivalent of 95,000 square feet or around two acres of surface area. Dunkel Bros. placed the plates as they were being delivered; because leaving stacks of trench plates overnight was prohibited. In all there was around 110 truckloads of plates and other material to deliver and the same amount to pickup later. Dropping off the material took us around eight days, while the pickup was accomplished in half that time. We fulfilled the entire order with our existing inventory by coordinating with all of Southern California locations, as well as our branch in Las Vegas. We delivered to several predetermined locations, which required lane closures from 6:30 am to 2:00 pm. The plates were available in various sizes, from 8’x10’ to 8’x20’ and anywhere from 3,200 lbs to 6,500 lbs. each. This was a great team effort by everyone involved.

Dunkel Bros. and Trench Shoring Company Do Their Part to Safely Deliver The Space Shuttle Endeavour From LAX to The California Science Center.

As a company that provides trench shoring safety equipment and teaches trench safety classes, and whose President is the current President of the North American Excavation Shoring Association, we are very concerned with the rise of trench related fatalities. Our employees and sales staff are asked questions all the time about equipment, job site conditions and workable solutions. Our purpose is to promote the safe and efficient use of excavation shoring practices.

Please, don't be a statistic - talk to us about how you can make your people safe in the trenches with the right products, or sign up for a trench safety training course.

Read the full press release at the U. S. Department of Labor >>

Trench Shoring Company President Kevin Malloy was elected incoming 2022 President of North American Excavation Shoring Association (NAXSA) at their recent convention in Dallas, TX. NAXSA was created to promote the safe and efficient use of excavation shoring practices and represents the professions in the shoring industry—from manufacturers, engineers and rental companies to distributors, suppliers and government agencies, all of whom share the common goal of maintaining safety in the excavation shoring industry.

Trench Shoring Company is proud to be a member of the Building Industry Association (BIA). The BIA is the leading advocate for thousands of building industry leaders who are committed to a better future for California by building communities, creating jobs, and ensuring housing opportunities for everyone. Trench Shoring applauds the launch of the BIASC New Homes Showcase, and looks forward to engaging with the builder communities it supports.

Trench Shoring Company congratulates Sheldon Creed, #2 Team - GMS Racing/Trench Shoring Company, driving his Chevrolet Silverado Chevy at Daytona International Speedway in the NextEra Energy 250 NASCAR Gander RV & Outdoors Truck Series. He had a great race, with a respectable finish. We are proud to be a sponsor and are looking forward to more great races from this young man.

Excavating to the Culture of Safety. Good planning before excavation begins is key. The Competent Person for T&E work plays a crucial role in managing and implementing the control measures as outlined in a good plan. A properly trained
Competent Person understands the work to be done, he / she is experienced in excavation work and knows how to keep the job safe for employees as well as be compliant with the OSHA excavation standard.

The Newhope Placentia Trunk Sewer Replacement Project aims to increase the size of the current system by replacing more than 7 miles of sewer line with larger diameter pipe.

Just when you thought trench worker safety was on an undeviating ever-safer course — BAM! — the dream of zero fatalities collapsed under a ton of dirt. Manufacturers discuss current statistics and the importance of protective systems.

Pasadena beefed up the security at the 2017 Rose Parade. Trench Shoring Company K-Rails were used to enhance the security and safety for parade attendees.